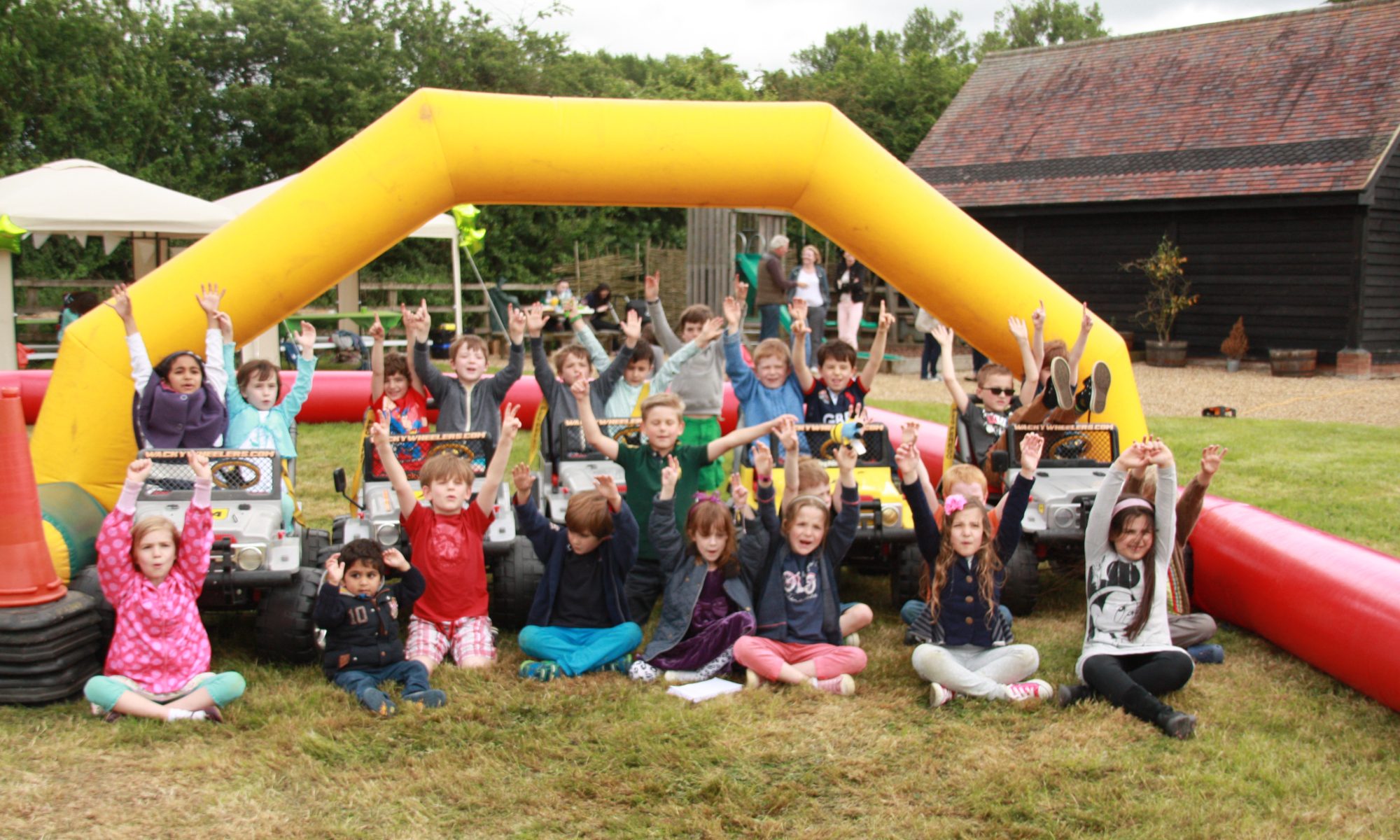 What to Expect at a Wacky Wheelers Jeep Driving Party

The first thing you’ll notice when you enter the venue is the superb track, complete with five rugged and fun 24v jeeps* which you’ll be so eager to drive. Sorry dad, you won’t fit – these are just for the juniors !

When everyone has arrived the Wacky Wheelers crew will sit you all down, introduce themselves (and you can introduce yourselves too if you want to), maybe tell you a few jokes then give you a little safety talk about driving do’s and don’ts,  and how to fit the seatbelts. When everyone is happy we’ll get going !  Important to note is that we won’t start the briefing until at least 2/3rds of the guests are there – so make sure they know to be prompt!

Everyone loves the music that is played through the Wacky Wheelers PA system, and quite a few people usually end up humming it for weeks afterwards. When the music is playing – it’s drive time !!!

The Wacky Wheelers party jeeps fit two at a time – so there’s always plenty of people having fun on the track at any one time.Apart from the first drive of the party (someone has to drive!) you’ll start off as a passenger. The music starts and the jeeps are then driven around one of our brightly coloured totally safe, 10m by 15m inflatable tracks*. Each piece of music is timed to last 3 minutes and when the music stops, that’s the signal to stop the jeep. The driver will get out, you’ll slide across into the driver’s seat and a new passenger will join your car as you get ready to drive. Of course, there’s always two Wacky Wheelers organisers* helping you all the time so it wont be too confusing.

When your turn finishes, you make your way to the off-track activity area where you can play on the activities included in our parties. We’ve got mini table football to keep you occupied, or you can just watch and cheer on your friends! You’ll be so busy, that before you know it, it will be time to get back on that track again and hone those motoring skills to get ready for your driving test…

Gradually the track changes… there are now some traffic cones to negotiate, and then some more appear as soon as you’ve mastered negotiating the first ones! The better the drivers the harder the course gets – and you have to make sure you really get the jeeps lined up to make it around the wiggly course! You’ll also take part in some special Wacky Wheelers Jeep driving games that make each party different – from Jeep limboto Cat and Mouseto whatever crazy creation we’ve come up with next! If it’s been chosen as an option by your mum or dad, you might even get one of our fabulous driving licences – just like theirs – in a handy laminated credit card size – but only if you’ve passed the famous Wacky Wheelers driving test!.

After the driving test has taken place the fab and groovy people from Wacky Wheelers will arrange all the cars in a fan shape under the arch, make them all safe, and then you can all climb onto the cars ready for the ‘Team Photo‘ – an awesome keepsake and reminder of a fabulous day.

As soon as the photos have been taken, the Wacky Wheelers team remove all but one Jeep from the track, and ask everyone except the birthday boy or girl to stand around the outside edge of the track.

Our VIP of the day climbs aboard a jeep all prepared for the victory laps .  As there’s nothing else on the track, the speed of the Jeeps are turned up to ‘high’* ready for a drive of their life… They will be introduced to the waiting fans to the sound of the Formula one Theme tune (Fleetwood Mac’s “The Chain” suitably edited) counted down before he or she drives around at super high speed while everybody sings happy birthday and cheers them on.

They are then brought to a halt with an authentic racing chequered flag waved over their heads. Sometimes, if the floors are slippy enough, the Wacky Wheelers team will help will spin the jeeps out on the turns so they go round sideways like a real rally driver!  If the party is shared, then the Wacky Wheelers organiser will turn it into a race between a max of 2 jeeps, which somehow always ends in a draw… This is a great high note end to the driving part of the party, and the drivers climb out of their cars to big cheers and applause.

Now you’re all together in one group, the Wacky Wheelersorganiser will ask you to help him deflate the track, which is an experience in itself (believe me – you have to see it !)… and having led you around the track will lead you all to the table to have your slap up birthday meal.

While you are out of the way having your tea, the Wacky Wheelers crew will pack up the Jeeps, track and other equipment to make sure nobody can get up to any mischief, whilst leaving the music until last so that you can listen while you eat. If your mums and dads have chosen them, the Wacky Wheelers organiser will present the amazing driving licences at the end of tea.

As the party is nearly over, its almost time to go home. To help make your mums and dads life easier when trying to work out what to give you at the end as a party bag, the people from Wacky Wheelershave got some options such as the Driving Licences, and Wacky Wheelers Jeep Driving Expert medals.They can even sometimes help with cakes and party food, so all your mum and dad have to do is turn up for the party, sit back and enjoy watching you all have the best fun !

* number of jeeps and organisers, and size of track depends on the party selected – in this instance its the standard party